WHAT IS
RELAPSING MS?

The more you know about relapsing forms of multiple sclerosis, the greater understanding you’ll have about how to manage therapy to fit your life. Get started by educating yourself on these key topics of the disease:

Multiple sclerosis (MS) is most commonly known as a disease that affects the central nervous system (CNS), but 2 systems are involved in MS—the CNS and the immune system.

The nervous system has 2 main parts:

Neurons, or nerve cells, send signals through the CNS to other parts of the body along nerve fibers called axons. These signals control physical functions like balance and muscle coordination, as well as memory and other cognitive abilities.

The immune system consists of unique types of cells such as T cells and B cells and proteins designed to identify and destroy infectious organisms and other invaders and incorrectly functioning cells.

Currently, the exact cause of MS is unknown. Inflammatory T cells attack the myelin that protects the axons, or nerve tissue, in the CNS. This results in scar tissue called scleroses (lesions) and disrupts the body’s ability to send signals from one part of the CNS to another, causing MS symptoms. 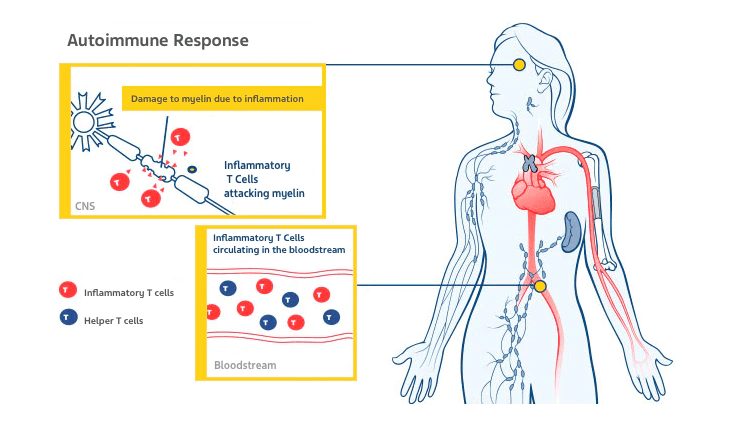 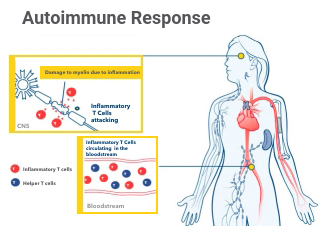 WHAT ARE THE EARLY SIGNS OF MS?5,8

Because MS affects 2 major systems within the body, it can manifest in multiple ways, but the 2 most common early symptoms are:

WHAT CAN TRIGGER MS RELAPSES?9-12

Most people with MS have what is called relapsing-remitting type, where they have relapses, then a remission where the symptoms either improve, stop getting worse, or go away entirely.

MS relapse occurs when inflammation of the nerves and myelin causes a temporary recurrence of existing symptoms or entirely new symptoms.

Pseudo-exacerbation can sometimes look like a relapse due to temporary worsening of MS symptoms, but there is no myelin inflammation occurring and it is often brought on by things like:

WHAT IS THE PROGNOSIS FOR MS?13

Significant physical disability occurs within 20-25 years of the first appearance of symptoms in roughly one-third of people with untreated MS. Research has shown that several MS treatments can slow this progression; long-lasting benefits are unknown.

WHAT IS RELAPSING-REMITTING MULTIPLE SCLEROSIS (RRMS)?9,14

A person diagnosed with MS has damage in at least 2 separate areas of the CNS which occurred at different points in time and all other possible diagnoses have been ruled out.

RRMS is the most common form of MS, affecting approximately 85% of people with MS. Two or more attacks (relapses), are usually followed by partial or complete recovery. During remissions, there is no progression of disease and all symptoms may disappear.

WHAT ARE THE SYMPTOMS OF RELAPSING-REMITTING MULTIPLE SCLEROSIS (RRMS)?4,5,15,16

MS symptoms are highly individual, just like MS patients. They are unpredictable and vary from one person to another. The symptoms you may experience vary, depending on the location and the extent of the damage in your central nervous system. You may find that you experience some of the symptoms at different times during the course of MS. Even pregnancy can impact your symptom frequency. The most common MS symptoms are:

People diagnosed with clinically isolated syndrome (CIS) may experience only 1 attack, or event, of MS-like symptoms and may have brain lesions consistent with MS. Clinical studies have shown that treatment following a diagnosis of CIS can delay a second attack, thereby delaying the diagnosis of clinically definite relapsing MS. Starting treatment at an early stage and continuing treatment with an approved relapsing MS therapy can reduce relapses and may help reduce future damage from the outset.

Based on the worldwide distribution of MS, scientists have identified factors that may provide clues to the possible causes of MS. These include the following:

WHEN SHOULD I SEEK TREATMENT FOR RELAPSING MS?4,23,24

According to the National Multiple Sclerosis Society (NMSS):
Your doctor may consider starting treatment with an approved therapy as soon as possible after a diagnosis of relapsing MS, or after a first attack with magnetic resonance imaging (MRI) findings consistent with MS, and other possible causes have been ruled out. Although there is no cure for MS, COPAXONE® has been shown to help manage the disease.

COPAXONE® is a prescription medicine that is used to treat relapsing forms of multiple sclerosis (MS), to include clinically isolated syndrome, relapsing-remitting disease, and active secondary progressive disease, in adults.

Do not use COPAXONE® if you are allergic to glatiramer acetate or mannitol.

Serious side effects may happen right after or within minutes after you inject COPAXONE® at any time during your course of treatment. Call your doctor right away if you have any of these immediate post-injection reaction symptoms including: redness to your cheeks or other parts of the body (flushing); chest pain; fast heart beat; anxiety; breathing problems or tightness in your throat; or swelling, rash, hives, or itching. If you have symptoms of an immediate post-injection reaction, do not give yourself more injections until a doctor tells you to.

Damage to the fatty tissue just under your skin’s surface (lipoatrophy) and, rarely, death of your skin tissue (necrosis) can happen when you use COPAXONE®. Damage to the fatty tissue under your skin can cause a “dent” at the injection site that may not go away. You can reduce your chance of developing these problems by following your doctor’s instructions for how to use COPAXONE® and choosing a different injection area each time you use COPAXONE®.

Liver problems, including liver failure, can occur with COPAXONE®. Call your healthcare provider right away if you have symptoms, such as nausea, loss of appetite, tiredness, dark colored urine and pale stools, yellowing of your skin or the white part of your eye, bleeding more easily than normal, confusion, or sleepiness.

The most common side effects of COPAXONE® include redness, pain, swelling, itching, or a lump at the injection site; rash; shortness of breath; flushing; and chest pain.

Please read the Patient Information in the full Prescribing Information.

Injections for 3-times-a-week COPAXONE® 40 mg must be at least 48 hours apart.